Memorial Day, originally known as Decoration Day, honors the memory of all the people who have died while serving in the United States military.

This day of remembrance officially began on 30 May 1868 when the head of the Grand Army of the Republic (GAR) established Decoration Day as a time for the nation to decorate the graves of the war dead with flowers. It became a federal holiday in 1971. 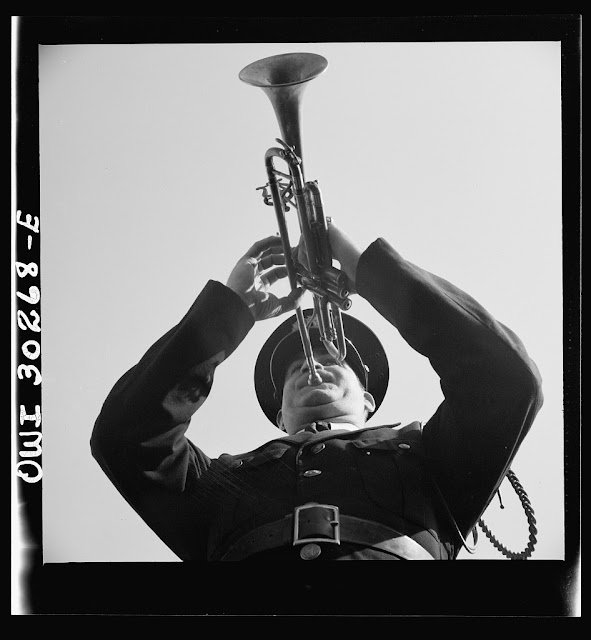 Parks, Gordon, photographer. Gloucester, Massachusetts. Memorial Day, . A Legionaire sounding taps for the War dead during services. May. Photograph. Retrieved from the Library of Congress, <www.loc.gov/item/2017855725/>.

The title of the Memorial Day image above (from the Library of Congress) informs us that this bugler was sounding Taps, which dates to 1862.


Harold Delbert "Hal" Currey, Jr. (the only son of the parents who raised me) and my uncle John William "Jack" Slater, both Second Lieutenants in the Army Air Corps, died in action during World War II. You can see their pictures and read more about them here.

© 2020 Copyright, Christine Manczuk, All Rights Reserved.
Posted by Pat Hartley at 9:04 AM No comments:

Quick Workaround: When You Can't See Ancestry.com Records from the Profile View

For whatever reason, Ancestry.com sometimes gets in its own way.  As an example, it has been impossible today to look at attached records by simply clicking the View button.

Fortunately there is a quick workaround.

© 2020 Copyright, Christine Manczuk, All Rights Reserved.
Posted by Christine at 6:46 PM No comments:

My Living DNA Has Been Updated!

Yesterday I received an email from Living DNA announcing that a free update was available for my 2017 ancestry results.* So I followed the link, requested my update and was told that it was in process and would be complete in less than 48 hours. The confirming email arrived early this morning. 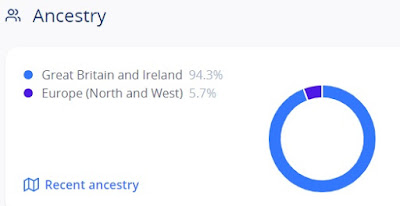 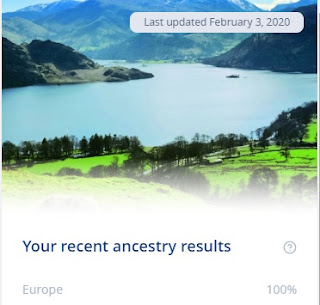 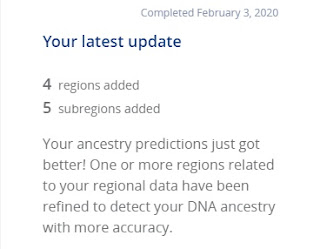 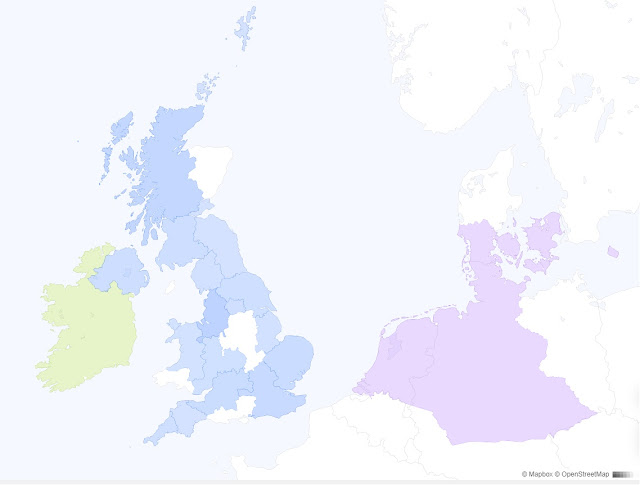 According to their data, my recent DNA heritage is 100% European--5.7% from my 2X great grandmother Delilah Grove (1845-1925) and the remaining 94.3% Great Britain and Ireland from everyone else.

Of the more exotic traces claimed by my previous results only Orkney remains (with the addition of the Shetland Islands). My alleged connections to the Iberian Peninsula, Scandinavia, and the Kurds and Pashtuns have disappeared.

*See my previous results here.
**Sadly the company has chosen to show everything in a low contrast format so you may find it hard to read.. And I've emailed them about that.


© 2020 Copyright, Christine Manczuk, All Rights Reserved.
Posted by Pat Hartley at 11:55 AM No comments:

I have been struggling for years to find the death record or obituary for my 2nd grand uncle, Herbert W. "Dutch" Porter, my great grandmother Letta Estella Porter's brother.  Because he spent many decades in Chicago I kept looking there for his death record, but none of the Herbert Porters who died there matched his information.  I also had reason to believe he had lived until at least 1974.

Now, thanks to the constant updating of Ancestry's databases, I effortlessly stumbled on his obituary yesterday, but it was in 1971 in Cobb County, Georgia!  I would never have thought to look for him there.

© 2020 Copyright, Christine Manczuk, All Rights Reserved.
Posted by Christine at 10:06 AM No comments:


Wow, I haven't posted for about six months!  Since last June my husband retired, a beloved cat died, and I was diagnosed and treated for breast cancer (complete with lumpectomy, radiation, and tamoxifen).

I've worked on my tree almost every day, but didn't put aside any time to do blog posts until things had settled down.

I love being able to see all the cases being solved!

Some of the people who are involved in this are almost certainly at the Institute for Genetic Genealogy (i4gg) conference.

I don't know the details behind the change in time and venue of this conference (it used to be in San Diego in December and now it is in Las Vegas in February), but fortunately for those of us who can't be there in person they have the option to purchase the videos of the sessions.  The videos have historically come out a number of months after the conference, so my guess is they will be available by the summer.


© 2020 Copyright, Christine Manczuk, All Rights Reserved.
Posted by Christine at 11:13 PM No comments:

Although he would probably have called himself a Peace Democrat.*

Here's a different view of the issue. 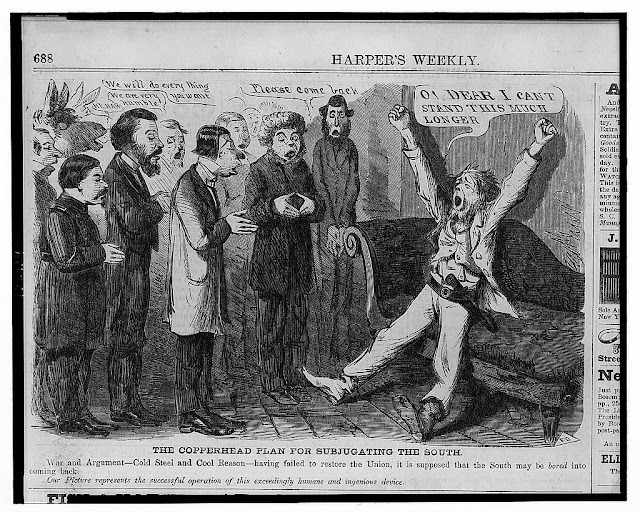 [Caption: War and Argument - Cold Steel and Cool Reason - having failed to restore the Union, it is supposed that the South may be bored into coming back. -  Illus. in: Harper's weekly, v. 8, no. 408 (1864 October 22), p. 688.
Library of Congress Prints and Photographs Division Washington, D.C.]

Eli, my 3X great grandfather, was born in Tennessee, his family moved to Illinois in 1818 when he was 14. He spent the rest of his life there in that part of Sangamon County which became Christian County in 1839. He and his wife Susan Hanon had nine children, six boys and three girls.** At least two of their sons served in the Union Army during Civil War.

Since it had been years since I have done any research on the Matthews line, this afternoon I decided to see what I could find at Newspapers.com. 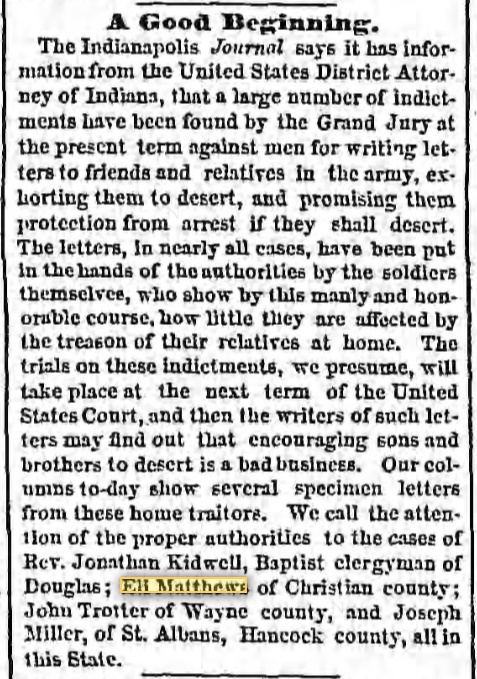 Of course I had to find out more: 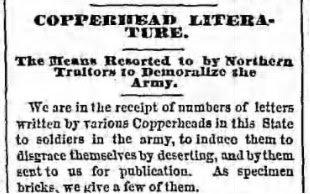 Eli sent this letter to his second son, Aaron V. Matthews who had joined Company L, Illinois 10th Cavalry Regiment and remained in that unit until December 30, 1864.*** Aaron's first wife Sarah Short had died around this time, leaving the couple's four children to the care of relatives.****

It's clear from the letter that Eli wasn't a particularly educated man but that didn't seem to hinder him from a public role in Christian County, He was the county's first postmaster, served as a Justice of the Peace and was appointed to several committees that represented the county.


*You can find more about these folks here.
**Their third child and oldest daughter Sarah married George W. Slater.
***About two months after his father's death.
****Aaron did marry again (in 1865) and he and his second wife Martha Jane Walker had five children together, one of whom he named Abraham, known as "Abe".

If you've ever researched an ancestor who fought in the Civil War, you're probably familiar with the Soldiers and Sailors Database of the  National Park Service (NPS). Now there's a new source of information for an earlier conflict, the Mexican-American War (1846-1848).* 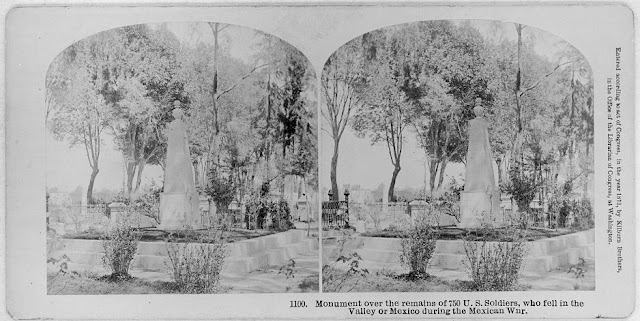 Last week the NPS and the  Federation of Genealogical Societies (FGS) announced the launch of of the U.S.-Mexican War Soldier & Sailor database:


This online, searchable database contains information for over 85,000 U.S. and Mexican veterans who served in this war. Many records include personal details, such as hair color and occupation.

The database allows descendants of these soldiers and sailors to connect to their personal history and helps Palo Alto commemorate and tell the stories of those who served. This invaluable research tool benefits genealogists, historians, as well as people who may have never known they are related to a U.S.-Mexican War veteran.

This project started in 2007. Progress was extremely slow until 2015 when FGS joined forces with the NPS. FGS offered their expertise and numerous volunteers.

Patricia Rand, the FGS contact, recruited and trained volunteers who spent over 17,000 hours doing the tedious task of inputting data. Their dedication makes it possible for future generations to learn about those who served in the U.S.-Mexican War.**

Although the database is up and running now, the virtual launch will take place at 3:00 pm (Central) on Monday, January 27, 2020 live on-line or in person at the Palo Alto Visitor Center.

I don't have any direct ancestors who were participants but Joshua Butler Walsh, the second husband of my maternal great great grandmother Mercy Ann Darling, was. We know more about Joshua than is listed in this database so I've contacted them (via their link) offering to share our information. I'll let you know how that turns out.


*I learned about this from a post by Judy G. Russell (The Legal Genealogist)
**From the FGS press release dated 14 Jan 2020.